"A good story should make you laugh, and a moment later break your heart."

A girl looking for a way out.

Being the daughter of New America’s leader, Mercury Masters has everything a girl could want. A glamorous life full of beautiful people, and the power to have anything she wants, except for one thing—to escape. Because Mercury’s perfect life comes with secrets to keep. Dangerous secrets that if made public would destroy her, her family, and her father’s reign. Then she meets Hawk.

A boy looking to be a hero.

Hawk, a handsome prep school dropout turned vigilante, has his own family secrets. Deadly secrets that have haunted him since he was fifteen. But instead of fighting the ghosts of his past, Hawk has assembled a group of misfit hackers and thieves to save the future from the corrupt government of New America and the mysterious virus that is killing off its citizens. But trying to do the right thing is tough when the person you really want to save is your enemy’s daughter.

A love that could kill them both.

Powerful forces keep them apart, but coming together could be the key to saving New America from destruction—even though it may cost both their lives.

All families have secrets, but what Avery doesn’t know might try to kill her.

The day Avery Belmont was born, her father disappeared. Shortly after, her mother stole her away to Detroit, far away from the secrets buried deep in Shady Creek. But when her estranged grandmother dies, Avery is forced to return and face the rumors that she’s a witch, making her wish she’d never come back—until Drew Montgomery gives her a reason to stay.

Drew knows things no one else knows. Things about Avery, about her family’s past, and about what really happened to her father. However, the price for information may be too high as getting close to the striking, yet caustic Drew starts to have deadly consequences, and living with the lies may be safer than uncovering the truth.

A heavenly twist on the classic tale of The Little Mermaid.

That's the number one angel rule, but Arianna has broken it—again. As punishment, she's cast out of Heaven and into a small town in Iowa with one week to discover the meaning of humanity or she’ll lose her wings forever.

Arianna expects to meet the challenge and be back in Heaven faster than she fell to Earth, but when she meets the handsome and elusive Griffin Carlisle she realizes risking her heart may be the most human thing of all. Could Griffin be her ticket home or a reason to give up her wings for good? 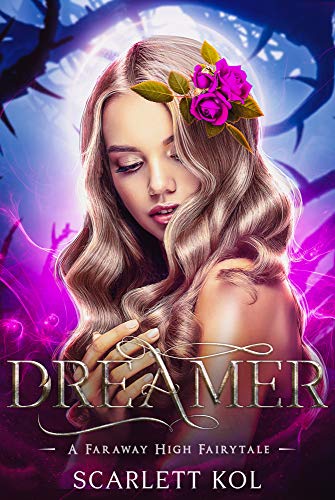 One kiss will change everything…

As one of Faraway High’s best and brightest, Brea Vardan has her future planned down to the color of her dorm room sheets. But when her sweet sixteen party turns into a nightmare, all her meticulous plans distort into dreams...until an unexpected kiss gives her a second chance at life.

Now instead of scoring A’s, Brea battles to stay awake as she searches for the identity of the one who cursed her, plunging deeper into a hidden world of terrifying mythological monsters. With a target on her head and a less than charming prince at her side, Brea must unravel the secrets of the past before someone puts her to sleep for good.

DREAMER is Sleeping Beauty reimagined with dreamy romance, magic, and mystery that’ll keep you up at night.

Kellan Casey gave his heart to a girl, but instead she took his soul and traded it to a Shadow Keeper for her own survival. Now Kellan must break the Shadow Keeper's curse before he becomes a demon, doomed to wander dimensions collecting souls for all eternity. But when his bubble-wrapped neighbour Abby decides to help find a solution, Kellan might have just found a new reason to keep fighting.

DATE WITH AN ANGEL / KISS ME AT MIDNIGHT: Part of the SWEET CANDY DELIGHTS anthology.  Available on Amazon here.

FINAL DRAFT - Paradox Steel is the girl of James Starkling's dreams -- literally. As the writer of the Paradox Steel superhero series James has a special relationship with his star, but now that the series has become popular everyone else wants a piece of her too. With a deadline on the next Paradox novel looming and the fans getting more and more obsessive, can James protect Paradox from the real world or will it destroy them both?